“Moloko Vitchyzny” company is a producer of extra quality milk. Our cows are always under close veterinary control and kept in the best conditions, during milking the milk does not come into contact with the environment, so it is clean, natural and useful. We produce the best quality extra milk.

We would like to share the conclusions of the Association of Milk Producers analytical department (with reference to the State Statistics Service) regarding the results of the first half of 2020 in the dairy industry of Ukraine. According to their findings, more than a third of the milk produced at the dairy farms of Ukraine is of extra quality. Let’s look at this in more detail. Here are some statistics and facts.

During the first half of 2020, milk processing enterprises of Ukraine received 1,8 million tons of basic fat milk, which is 7,1% less than in the same period last year. This is 39% of all milk produced.

Unfortunately, the percentage of milk that goes to processing is declining every year. The main reason is a significant drop in production in households, which the industrial sector is currently unable to close. At the same time, it is industrial farms that provide the lion’s share of raw materials for dairy enterprises. Thus, out of the total volume of milk purchased by processors, 1,3 million tons of milk came from agricultural enterprises (-0,8%, by the first half of 2019), income from households amounted to 376,5 thousand tons (-15,6%) .

Such a sharp jump is explained by market experts in particular by the fact that due to new requirements for the hygiene of raw milk, a number of processors have begun to indicate second-class milk from the population as first-class milk. While the products of “Moloko Vitchyzny” LLC are always distinguished by their quality and compliance with National Standards of Ukraine.

As a result, the share of milk received from the population of the first grade in the first half of this year increased eightfold – from 10,4% to 81,2%! And the second grade, on the contrary, decreased sharply – from 84,6% to 17,2%. That is, there was a substitution of concepts. Among the reasons is the lack of raw materials, due to which processors cannot completely give up peasant milk.

These are the statistics for the past six months. It is hoped that the situation in the industry will improve in the next six months. For its part, the company “Moloko Vitchyzny” makes every effort to develop, increase milk yield, automate production. We always care about our customers and are responsible for the quality of our products!

Quality of milk delivered by enterprises for processing in the first half of 2020, 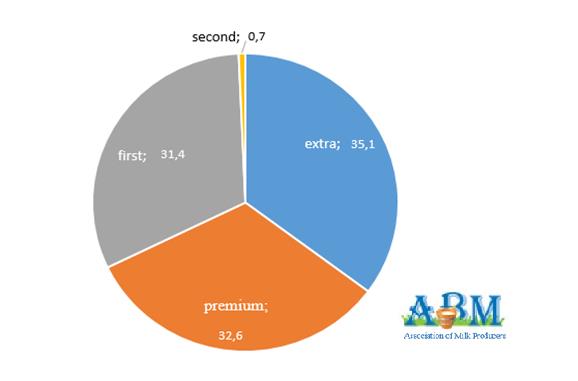